Juromenha Jeca and a Fortress in ruins 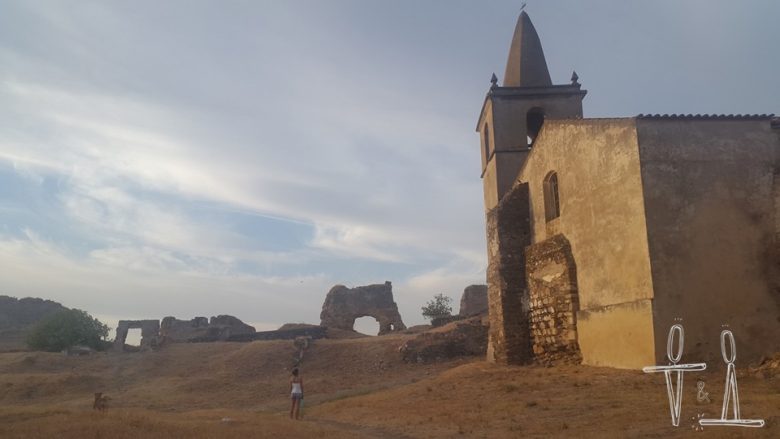 It’s a few minutes before 10h00. I walk around in circles, I check the clock, I peek through the window, profoundly annoying Zeza with my impatience. She does not understand, and to be honest, I’m not even sure I do. But ever since Vanda, the host at the rural tourism complex we’re lodged in, explained how breakfast is served here, I’m yearning for the moment a breakfast basket is delivered at our house. There’s a fairy tale element about a breakfast basket that tells me this will be a magical meal.

I step outside. We’re the only guests at the complex, made of 4 typical and beautifully restored Alentejo houses, a vegetable garden and an infinity pool. We arrived yesterday, shortly after sunset. So only earlier this morning could we bask on the amazing views to the Guadiana river and to the Fortress of Juromenha.

I gaze at the reception, expecting to catch a glimpse of some sort of movement towards our house. Nothing. Even the Guadiana waters seem to have stopped flowing. And besides the chirps of sparrows and the water falling off the edge of the pool, everything is silent in Juromenha. I get back in.

Probably, you have never heard of Juromenha. Up until we saw it on the map, the pinpoint center of the triangle formed by Vila Viçosa, Elvas and Olivença, we hadn’t either. Juromenha is, as I said, a fortress. Well, it’s not just a fortress. It’s a massive, hilltop stronghold towering above the Guadiana, overlooking Spanish territory on the other margin. And it’s not only a fortress. It’s also the 2 or 3 streets of whitewashed houses with blue and yellow skirts, and the set of vineyards and olive groves that surrounds them.

Finally, a knock on the door. The time has come. I open the door, receiving a heavy wicker basket and a smile. As I remove the picnic blanket covering the treasure, its golden reflection lights the room. Alentejo bread, croissants, cheese, ham, apples, honey, yogurt, milk, coffee in a thermos, natural orange juice. It’s everything I wanted it to be. A tear runs down my face as I discover homemade biscuits and jams.

As we top off this godsend meal with an espresso at the reception, we ask Vanda about the fortress. Well, it’s not just a fortress, she says. Juromenha was once one of the most important defensive bastions in Portugal. It helped repel many Moorish and Spanish raids, held royal assemblies, hosted royal weddings. But as relations with nuestros hermanos improved, roughly from the Peninsular War onward, Juromenha and the many other fortified settlements scattered along the border gradually lost their military importance. Eventually, early in the XX century, the fortress was unmanned and the population built the village on its northern outskirts. Visits are permitted, but caution is advised. Abandoned as it is, the structures are frail and might collapse.

We might just do that, later on. Right now, we have the pool for ourselves and we intend to make the most of it. Even though it’s early October, it’s a hot, cloudless day, perfect for poolside napping, book reading, Sun roasting and water soaking. Sometime in the afternoon we open up a bottle of Alentejo white wine, and a bit of second base action ensues. Oh lighten up, we’re engaged, we’re allowed to. And no one’s watching. I think.

The afternoon progresses and the Sun weakens, but we’re finding it hard to leave our sunbeds. And just as we’re considering postponing the fortress visit, a car pulls over on the driveway. Three noisy kids blast into the pool faster than their parents manage to get out of the car. With our peacefulness ruined, it was easier to beat the slumber.

The friendliest guide we’ve ever met

We exit the property and move uphill through a paved stairway leading to the village. Juromenha is, even for Alentejo standards, a sparsely populated settlement, but has a fully functioning Portuguese Traditional Public Surveillance System. Two grandmas sitting at their doorsteps record our movements as we reach the top of the stairs, saving the files in their hard drives for future reference.

The dark walls sprout out of the sunburnt hilltop as we take the dirt road that encircles the fortress. At a makeshift workshop between two bastions, an old carpenter restores a nightstand. His two small dogs keep watch. One of them barks furiously at us, a proper fortress keeper. The other one, less dedicated to his guarding duties, seems to prefer to tag along with us. It’s a she, so we call her Jeca – northern Portugal slang for a small dog.

The road turns southwest, and we’re now walking between the fortress walls and the steep hillside. From up here, I’m positive the Guadiana is, after all, a streamlined lake. Never have I seen such idle waters. Jeca leads the way, running in front of us, impatient as we sit on an old bench to admire the views to the vineyard patched Spanish margin. Well, technically Spanish, but rightfully Portuguese. We’re still waiting for Olivença, hermanos!

We contour the southern bastions, and the main gate stands to our right, completely open. Jeca rushes in, disappearing in the dark hall beyond the threshold, as an eastern wind picks up, cold, ominous, clouding up the sky. Remember that scene in Lord of the Rings when Aragorn, Legolas and Gimli stand in front of the Paths of the Dead gate?

After a brief moment of hesitation, a very brief one, we follow Jeca in. Winds from Spain never bring good news.

Jeca awaits us on the other end of the dark hallway.

The Alentejo Sun cooked the ruins to the same burnt yellow shade of the Guadiana plains. A few trees stand beside heaps of rubble from collapsed structures, like cedars in a graveyard. Several segments of the northern part of the wall have crumbled, and only 3 buildings stand. A small chapel, some sort of a barracks and a church, whose bell tower seems slightly leaned. It won’t take long until it crumbles too.

A Portuguese flag waves on a pole in the highest turret. But Portugal seems to be long gone from here.

Maybe, if the light of this filtered sunset wasn’t so feeble, if this cold breeze wasn’t blowing, this scenario would not seem so bleak. If the silence wasn’t so overwhelming, if the river would seem to flow, this image would not be so haunting.

Jeca scouts us around, turning every corner ahead of us, happy to be showing us around her secret place. Having her with us is comforting, I must say. Eases the anxiety we’re experiencing from exploring a ghost town. So much so that, when she goes inside the church, I boldly follow, despite Zeza’s warnings. And rightly so, just as I enter the empty, dim chamber, I’m startled by a loud rumble.

Surely the church could have picked up a better time to collapse. I run outside for my life, hoping to make it out before the ceiling falls over my head. As I get outside, I witness a cloud of pigeons storming out through the front door. The rumble was nothing more than the amplified flapping of their wings. Zeza nearly wees herself. And I swear that’s a smirk on Jeca’s face.

As we further explore the place, we notice a pack of 3 stray dogs nearby, staring at us. They’re not too big, but don’t seem friendly, and we’re thinking we might be in trouble here. But, as casually as if she had an appointment with them, Jeca joins the pack, and they  disappear through a breach in the northern wall.

We wait for some time, but Jeca doesn’t return. We leave the fortress, enjoying a red sunset behind the chalk white Juromenha houses as we head back down the hill. Heavy hearted for not knowing what happened to our newest friend, but glad she joined us for this brief moment.

Visiting the fortress left us a bit stricken, to be honest. It’s one thing to visit an archaeological site, or a set of protected ruins turned into open air museums, where there’s an effort to preserve and tell the stories they hold. This, however, is nothing but neglect. Neglect of a symbol of Portuguese resilience and unwillingness to subjugate, left to be used as a dog playground. With all due respect, Jeca, wherever you are.

Unfortunately, this neglect is but a symptom of a far greater problem, one that’s been plaguing Portugal for too long. So long it’s almost an endemic feature of its people. A tendency to overlook everything Portuguese, that shows itself in many faces.

Sometimes it’s in a sort of a detachment from our identity as a nation. Like in the way that people these days don’t know the reason for October 5th’s holiday. Which happens to be today.

Sometimes, it’s in the lack of interest shown for general nationwide topics. I know many a brilliant mind who can draw a perfect political X-ray of the extent of Trump’s policies on American Healthcare, but can’t name the Portuguese Health Minister.

Other times, it’s in the little things, on our everyday habits. Fado isn’t heard, or even appreciated, by the greater majority of the population.

Others still, in the belief in that what’s foreign is always better. In special occasions, we toast with a cheap parody of French Champagne which costs about the same, if not more, than a solid Port.

And here, standing on a hilltop overlooking Spanish territory, we look upon the ugliest face of Portugal’s self loathing. The neglect of our History. The most dangerous thing that can happen to a country.

We were once a powerful nation, exploring, innovating and leading in several areas, and we lost that. We lost it because in the last half millennium we drowned ourselves in fatalist and religious conformity. Because we listened to those who told us we were no better. Because we forgot about who we are and what we did.

In recent times, with the financial crisis, the terrorism threats and the migrant inflow, praises to the dictatorship years are getting common. Forgetting how the majority of people were poor and starved back then. How thousands risked their lives to flee the country, how children died due to lack of vaccination and medical care. And how people were chased, beaten and even killed for having a non conformist opinion. Just like, for instance, praising a former government.

While our past is left drying out in the Sun and rusting to the wind, we’ll remain sailing aimlessly in the present. And the future will be nothing more than an occasional mirage in the distance.

As of today, Juromenha Fortress is still in ruins. In late 2017, local authorities pitched to include the fortress in the REVIVE Project, a governmental program that aims to recover heritage buildings and rehabilitate them for tourism purposes, with the help of private funds. Their plea got them a few seconds of spotlight in minor media and a government visit. But, months later, there’s still no official standpoint as to whether Juromenha will make the cut.

Sounds like Jeca and her friends will keep their playground for some time. 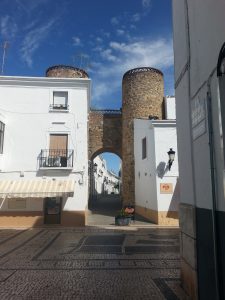 Getting Olivença back: a raid on our own territory