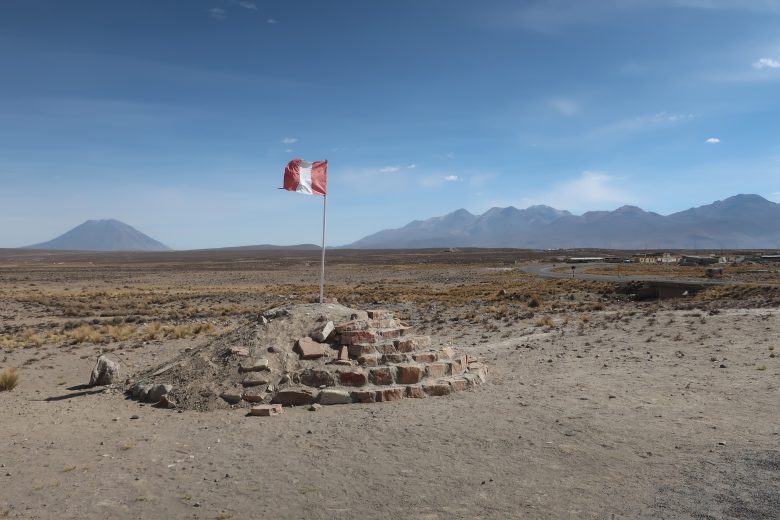 I take another sip of coca tea. After a few days in Arequipa, we’re no longer pestered by the soroche, but we have grown fond of this local antidote for the annoyances of high altitude. A hot cup of the Andean energy drink mid afternoon has become a ritual for us. Preferably, at a rooftop café, so we can enjoy the company of the town’s most illustrious citizens: its volcanoes.

We’re at a coffee/chocolate/tea/everything-in-between place on Calle Santa Catalina. The chilly drafts that usually cut through Arequipa have taken the day off, and this combination of hot tea and afternoon Sun imparts in me a slight regret for not ordering a beer instead. “Hey, a ritual’s a ritual”, Zeza says, focusing her camera on the saw-toothed ridge of Chachani.

Chachani. Quechua for ‘skirt’, according to this fold-out map we were given somewhere. Our guide from yesterday’s trip to Colca Canyon, though, deemed this inaccurate. Chachani translates to ‘dressed in white’, or ‘bride’. Whatever it means, I can’t stop repeating it in my head. Chachani. A powerful word, conveying reverence and maybe a certain fear as it is pronounced. A suitable name for a volcano, therefore.

It’s even more suitable considering the uncertainty regarding its status. With an unknown activity record, both present and past, it is impossible to conclude whether this is an active, dormant, or extinct volcano. However, the Incas should have a reason for naming it ‘the bride’. Perhaps because it can explode out of nowhere.

But even with this mystery element strengthening the aura of fear around it, Chachani cannot generate the same sense of awe of its neighbor. El Misti’s unusually perfect conic shape, almost a cartoonish rendering of a volcano, figures in every search engine’s picture of Arequipa.

But to see it in its sheer size, its menacing loneliness reigning over the White City in the hazy afternoon… that’s a sight I’d like to keep with me forever, if my ageing brain allows.

“We should get going”, Zeza says, right when I was about to order a beer. “There’s still time to visit the Monastery before sunset”.

The charm of Arequipa

We go up Calle Santa Catalina en route to the Monastery. Arequipa owes much of its charm to its volcanoes. Firstly, because the sillar, the white rock used in most of the city’s colonial construction and which coined its nickname, is spewed from them.

And secondly, because seismic reasons advise against tall structures, any stroll through downtown is a 3-D slideshow of superb images of El Misti or Chachani peeking between buildings, lurking behind corners, hiding behind misty curtains.

These images of the volcanoes are, for me, the highlight of the Monastery. I could spend hours gazing at them. Not only for their utterly natural beauty, but also, and perhaps mainly, for their deceptive serenity. Any minute now, hellish fires might wreck this peaceful scene. El Misti’s perfect cone might explode into thousands of small, irregular geometrical shapes. And Peru’s second largest city might be completely wiped out. Any minute now.

Arequipa is just one of many century-old cities thriving on the immediate vicinity of active volcanoes. Early settlers were drawn by the fertile soils more than they were turned off by the potential geologic hazards.

Which is understandable, especially here. Farmable land is a rare gift on this mountainous belt between the desert and the jungle. And I don’t think most people would hesitate on choosing between a several weeks long starvation to death or an instant obliteration in a pyroclastic flow.

Nonetheless, this down-to-earth, entirely objective reason as to why people live in the shadow of volcanoes can only satisfy those that had not the opportunity to witness these settlements and their landscape.

The first people to settle on what would become Arequipa didn’t just land here from a far away land, built a village and began cultivating before realizing that there was more to those mountains than met the eye.

They would have arrived gradually, coming from nearby settlements, first a just a handful, then a few more. They would have known already what a volcano was, and been aware of volcanic activity in the area.

The fertile soils were, certainly, a strong argument for people to consider settling here. But to risk living in imminent apocalypse, higher values would need to enter the equation. And the only thing that could oust food in importance was faith.

Volcanoes are hot spots. Literally and figuratively. They are gates to the unknown, borders between what, at the time, people could understand and what people could not. Portals from which Gods, or Mother Nature, or Ancestors, or what ever they would call it, would manifest or communicate.

As these early settlers arrived on this empty plain and gazed upon the three volcanoes that surround it (Pichu Pichu would still have been visible before construction began), they knew that was holy ground.

And who wouldn’t live on holy ground?

Just as we exit the Monastery, we hear loud music getting nearer. A garbage truck turns the corner from Calle Ugarte and parks smack in the middle of Santa Catalina. I recognize the song: it’s “Under the Sea”, from Disney’s Little Mermaid. Blasting though the truck’s speakers, urging people to bring out their garbage. Cars stuck behind the truck honk incessantly. Life in Arequipa goes on normally, almost orderly. As if there’s no such thing as volcanoes.

It’s already twilight as we arrive at Plaza de Armas. Just in time for our other Arequipean ritual. Watching the sunset over the volcanoes from the balcony of the Palacio Municipal, on the southern side of the Plaza.

“Under the Sea” is still audible in the distance, over the agitation of the Plaza below. The clouds slowly turn pink as the slanted sun rays highlight the scars of the volcanoes. We watch this scene under the arcades, feeling as close to a concept of a God as we have ever been. 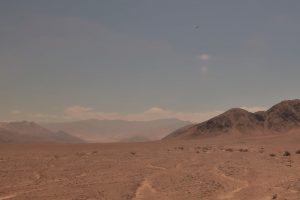 Nazca lines: the story of a flight that never happened 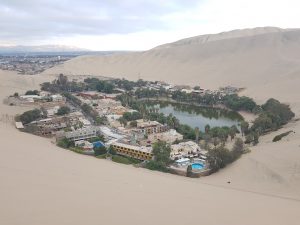